The most recent figures released by the Central Statistics Office show no sign of abatement in the Construction industry. According to the CIS, € 8.0 billion worth of projects were on site in 2016, an increase of almost €1.3 billion from 2015.  It also indicated that €11 billion worth of projects have been granted Planning Permission, while over 16,500 residential units have been permission   over the same period. Truly remarkable figures with no sign of slowdown. 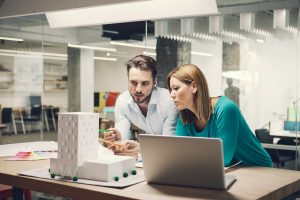 The number of major projects moved on site has increased by 15% from 939 to 1,342 in 2016, while the volume of projects moving on site increased 27% in 2016 to over 2,800, and the value of projects that received Planning Permission was up by 37% over 2015. The value of projects granted permission has more than doubled in the past two years, with Residential and Commercial sectors being the leading two in terms of collective project value.

There is a severe shortfall in the number of professionals being recruited in the marketplace at present. Not since the heady days at the height of the Celtic Tiger has the demand been so acute. The Government has finally woken up to the kind of life style requirements essential to attracting overseas professionals to return home. Uppermost is the requirement for reasonably priced, available housing stock in accessible locations. Affordable housing in locations, far removed from places of employment, no longer cut the mustard.

The Central Bank introduced prudent, but very harsh, criteria for would be purchasers in 2015, as a measure to slow down the excesses of the previous loose regulatory environment which obtained during the first decade of the century. The market suffered a marked slowdown in demand for houses, particularly because of the requirement for a 20% deposit. In an effort to kickstart the residential market and the supply of housing units, the Government has devised many imaginative solutions to overcoming the “rulebook”. One of the more imaginative schemes is the introduction of the Help to Buy Scheme which was announced in Budget 2017. This applies to first time buyers, with incentives that allow buyers refunds of income tax paid over the previous four tax years to a maximum of €20,000. The scheme runs until end of year 2019 with a maximum house value of €500,000. The 20% deposit is therefore reduced to an effective 10-15% depending on house price. In addition, the grants for Home Renovation Incentive up to a total of €30,000. This incentive runs up to the end of 2018.

Mortgage approvals increased by 31% in Q4 of 2016 according to the Banking Payments Federation Ireland. The report also found that during the period, 3144 mortgages were approved each month, of which nearly 48% were first time buyers. A marked increase in the underlying figures from previous periods. A total of 34,230 mortgage approvals were reported for the year 2016, with a value of €6.7 billion, a truly significant indication that the Government policies are a response to the optimistic outlook for the future of the Irish economy.

How to Build Your Professional Network on LinkedIn

LinkedIn is a fantastic place for you to build yo...read more

Starting a new engineering job is both exciting a...read more

How to Create the Perfect CV as an Engineering Student

First – congratulations on coming to the end of y...read more